↓
Home→Congress News→BUCHEL Invitation to the international action week from July 12.-18. 2017 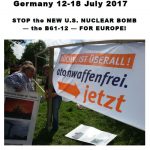 United we can stop the planned nuclear bomb!
Please join the German campaign to send the existing US nuclear weapons back home, and to organize against the new B61-12 nuclear bomb, scheduled to be built in the US by 2020 and deployed in five European countries – Italy, Belgium, Holland, Turkey, and Germany.

We invite anti-nuclear, environmental and peace activists from Europe and the U.S. to our camp at the main gate of the military base in Büchel. The international week of actions is part of our 20 weeks
of action from March 26th to August 9th (Nagasaki memorial day). Twenty weeks represent the 20 B61
H-bombs at Büchel. Our peace camp includes networking, vigils, and nonviolent civil resistance.

This international week is the first one uniting with anti-nuclear resistance in the US, the country where
construction of the bomb is taking place: 8-to-10 people from the US are planning to participate and
300 have signed our Declaration of Solidarity:
https://buechel-atombombenfrei.jimdo.com/international/

Political, Military & Corporate Background Despite the end of the Cold War, about 20 US
nuclear bombs are still deployed at the German air force base Büchel in West Central Germany.
German pilots are both trained and obliged to take off with these bombs in their Tornado fighterbombers when the orders come from a US president, through NATO, and to use them on their
targets. This horrifying war plan is part of the “nuclear sharing agreement” in NATO, and includes
the first-strike option. NATO calls it Power and Burden Sharing. As part of the coalition in the war
against Syria, some German Tornado jets and pilots from Büchel are also deployed in Turkey – together
with another 50 US B61 nuclear bombs! – at the Incirlik Air Base used by Turkey, the US, the UK, and Saudi Arabia. These US weapons of mass destruction – illegal under German, US and international law – are scheduled to be replaced by expensive (a $10 billion program), new, precision-guided nuclear  weapons in the near future, through the National Nuclear Security Administration’s modernization program.

Three US National Laboratories – Los Alamos and Sandia in New Mexico, and Lawrence Livermore in California – have worked to design the B61-12, and parts are being made at the Y12 complex in Tennessee, the Kansas City Plant in Missouri, and the Sandia National Lab in New Mexico. Final assembly is to be the Pantex site in Texas. Major contractors are Boeing, Lockheed-
Martin, Honeywell, and Bechtel. Hans Kristensen of the Federation of American Scientists has
reported that the 400 new B61-12s planned for Europe will cost at least $25 million apiece.

Germany is the only country inside Europe that has a German-wide campaign of 50 groups and
organizations (called Büchel is everywhere – nuclear weapons-free now!) with the focus on civil resistance at the scene of crime. We believe that besides lobby work, we also have to increase awareness and political pressure using nonviolent direct actions to halt the B61 replacement.

Because of public interest – a poll shows that about 90% of the public is against the US nukes – our
united coalition work, which includes wellrespected organizations like IPPNW, IALANA,
German Fellowship of Reconciliation, Pax Christi, and DFG-VK, etc., lead to the political decision not to criminalize participants of the blockades.

this year in Germany at Büchel is special again and I invite you to come
to our international week (see attached flyer) and to spread this news!

At the camp we also plan workshops and networking on how we can stop the
new B61-12, and also about the F-35 fighter plan, including the campaign
Don’t Bank on the Bomb. On 7th of July finishes this year negotiation on
the international treaty ban in New York. By this we will see how
successful also this will work in our hands, because with a total ban it
is even more difficult for nuclear states to go on with their upgrading
programm, which is also against the US law already-
We have to dissmantle this whole cover up about “modernisation” and also
with strong actions!!!

The G20 summit in Hamburg/Germany will be just prior on the 7.&8. of
July. Since our vigils and actions in Büchel will be for 20 weeks, you
are welcome to come to Büchel straight after the G20 summit or whereever
you are. We just need to know beforhand how many to expect, so please
contact us in time.

(The very first nuclear test was conducted in Almogordo, New Mexico on
16 July 1945!)